How To Fix The Economy 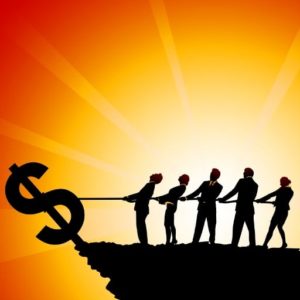 Do a quick search on Google for “GDP.” The very top result is a graphical representation of the U.S. Gross Domestic Product. On the left is a series of countries you can select to compare. Select China and make a note of the latest trend.

Wikipedia defines GDP as: “the market value of all final goods and services produced within a country in a given period of time.” In other words, the wealth of any particular country at a given time and thus the standard of living of its people.

Now, remember the trend in comparing the U.S. vs China? Look again. Extend those trends out 5-10 years and you’ll have no trouble imagining China overtaking the U.S. as the world’s wealthiest country.

“But why should this be disturbing? Hurray for China, they’re becoming a player in the capitalist market.”

It’s not that they’re doing well, it’s the rate at which they’re gaining that should alarm everyone. The U.S. and indeed the entire world has become increasingly addicted to cheap goods from foreign sources like China. All in the midst of the toughest economic times since the Great Depression. To the point it’s becoming harder and harder to find domestically produced products at all.

Meanwhile finding jobs here in the U.S. has also become increasingly more difficult. The jobs we do have are primarily retail and service industry related jobs. Where are the manufacturing jobs? Textiles? Electronics? Semiconductors? Steel? Petroleum?

Oh, we buy all of that from overseas.

So essentially for the past few decades, we’ve been spending our money on cheap products from foreign countries and not making anything in return. This is called a trade deficit. It sounds harmless until you realize there is a finite amount of money circulating in our economy, we’ve done nothing but spend it and we’re running out.

“But wait, we can’t run out. All we have to do is print more money.”

Great. Print more money. But what is the value of the U.S. Dollar in the world market now? It’s taken a pretty heavy hit lately. The more we print, the less it’s worth. This is called Inflation. The more inflated our currency is, the less it will buy. And at some point, the value of our currency is going to be so low, our foreign creditors will stop accepting it. Then what?

All of these are symptoms of a single problem: Trade. Economics 101 stuff, basic supply and demand. We buy, they sell. They buy, but we don’t have anything for sale. We have got to get back to the factory, plain and simple.

The question is how do we get back into manufacturing? How do we compete in a market saturated with cheap products?

The first thing we have to do is stop this “Globalization” nonsense. I’m sorry, but at this point in time we cannot afford to worry about the rest of the world. You don’t carry a man with a broken leg out of a burning building when you yourself are currently on fire. Once we start looking out for number one again, then we have two paths we can take towards rebuilding our industries.

The Voluntary Path: We as consumers must begin rejecting foreign-made goods. Back in the 80’s there was a huge movement towards purchasing products labeled “Made In U.S.A.” We need to adopt this mentality once again. Demand products manufactured domestically. Look for them, buy them as exclusively as possible. They’re hard to find and may be more expensive than similar foreign products. But remember, expense is a relative term. Paying a few extra dollars for a tee shirt is less expensive in the long run than total economic collapse.

If for some reason you can’t find a domestically produced product, branch out to our neighboring countries first. Start with North American countries, then look for South American products. If nothing else, you’re keeping workers from our neighboring countries employed in their own countries, instead of coming here taking jobs once reserved for our youth. You’re helping to curb illegal immigration that way! And increasing demand for domestically produced products. Demand that ultimately dictates the need for an increased supply, which results in JOBS.

The Forced Path: Traditionally, in order to keep prices equal to those of domestic products, import tariffs were imposed on foreign products. In retrospect, this should have been done some time ago. But “Globalization” and “Free Trade” ideologies that have run rampant in the last few decades prevented this practice. I believe we are presently long past the point where this would be a viable solution to the current problem. If the American consumer is unwilling or unable to curtail the demand for foreign products, we must do something to recover the jobs losses we have suffered.

Thus I propose a ban, even if only temporarily, on the importing of finished goods.

“Whoa, we can’t just stop importing all together!”

I suggest nothing of the sort. By finished goods I mean products that are ready to be sold directly to the consumer straight off of the ship. We would still allow the parts to unfinished products to be imported, but we would mandate that the products must be assembled and packaged in the U.S. before reaching the store shelf.

You’ll see a renewed competition between foreign and domestic part sources. Yes, the parts from overseas are cheap, but they still have to be shipped. So equilibrium will be established in pricing when domestic parts can be obtained at the same overall cost. Now the competition will be over the quality of the parts. American jobs will be created to serve the American consumer. Fully domestic products will be available at levels not seen in decades.

Of course they will. But you’ll see unemployment rates drop like a stone down a well. The economy will roar back to life. The middle class will reappear. Even without increases, tax revenues will soar enough to pay for the massive deficits we’ve incurred over the past few decades. And with the U.S. strong once again, the global economy will begin to recover too. Once the U.S. is back on its feet, perhaps we can even begin lifting the import ban and, watchfully, open the gates of free trade once more.

But none of this is possible until we restart our manufacturing and assembly sectors. We have to start producing again. We have to start buying domestically produced products, by choice or by force. We’ve grown decadent and lazy during this spending spree. It’s time to get back to work.