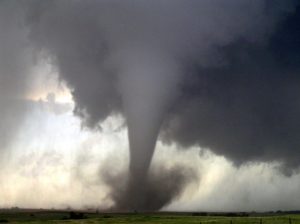 The National Weather Service seems to believe there is a way to fix stupid. According to this article by the AP:

In a test that starts Monday, five weather service offices in Kansas and Missouri will use words such as “mass devastation,” ”unsurvivable” and “catastrophic” in a new kind of warning that’s based on the severity of a storm’s expected impact. The goal is to more effectively communicate the dangers of an approaching storm so people understand the risks they’re about to face.

The problem is, not every tornado warned storm actually produces a tornado. In fact, the majority of warned storms do not. This causes the stupid in our society to become complacent and simply ignore the warnings.

“We’d like to think that as soon as we say there is a tornado warning, everyone would run to the basement,” said Ken Harding, a weather service official in Kansas City. “That’s not how it is. They will channel flip, look out the window or call neighbors. A lot of times people don’t react until they see it.”

We all know, you can’t fix stupid.

The reason we have tornado warnings in the first place is to tell the public there is a danger. Warnings, until very recently were issued on a county-wide basis because of the difficulty in predicting which storms would actually produce tornadoes.

Recently warnings have become more accurate, allowing the NWS to draw polygonal boxes around the warned areas, rather than whole counties. Newer technology and an abundance of storm spotters in certain areas allow for better, real-time information on storms.

But the system is not perfect. There is still a high degree of uncertainty about which storms will produce a tornado, and which ones won’t. So if a storm has the indicators in place to suggest a tornado will form, a warning will be issued for the affected area.

And let me be clear… THERE IS NO WAY TO JUDGE THE INTENSITY OF A POSSIBLE TORNADO. In fact, there’s no way to judge the intensity of an ACTUAL tornado without actually being there. The EF (enhanced Fujita) scale only estimates the intensity of the winds in reference to what a tornado has already damaged. What range of winds does it take to cause certain damages to certain materials and structures. If these materials and structures are not present, there is no way to gauge a tornado’s intensity at all.

For example, a tornado packing surface winds of over 200MPH rips through a town… Its rated an EF5 tornado, because the damage it caused matches the wind speeds needed to cause it. The same 200MPH tornado rips through an open field, with no structures or anything around to gauge it. It’s rated an EF0. No damage. Also, THERE IS NO SUCH THING AS A SAFE TORNADO. Even the weakest tornadoes can cause injury, death and structural damage.

So, my issues with the idea of a scaled, three-tier warning system are pretty simple.

I can see it now…

“THIS IS AN EXTREMELY DANGEROUS TORNADO WITH COMPLETE DEVASTATION LIKELY. … SEEK SHELTER NOW! … MOBILE HOMES AND OUTBUILDINGS WILL OFFER NO SHELTER FROM THIS TORNADO — ABANDON THEM IMMEDIATELY.”

Now, don’t get me wrong. I agree in principle with what the National Weather Service is trying to do. And perhaps scarier wording should be used. But perhaps there is a better solution.

I propose that we adopt the “Tornado Emergency” as a type of warning. This would add the extra sense of urgency needed for times when a tornado is confirmed to be on the ground and causing damage, and those who have not already sought shelter during a Tornado Warning. This gives us:

After that, I genuinely believe it’s up to the individual to be responsible for their safety and that of their family.

I’ve heard it so many times… “If it’s my time, it’s my time. Nothing I can do about it.” Bullshit. You were given a brain for a reason. Your tax dollars go towards making sure you have ample warning. There are many many sources of information and ways you can get those warnings. TV, radio, weather radio, ham radio, internet, cell phones, etc. If you choose not to act on those warnings, it’s your fault. It’s not fate, it’s not “God’s will,” it’s just stupidity.

If there’s a tornado watch, you need to keep abreast of the weather. Watch the skies, find a weather radar on TV or online. Know where the storms are and when they’ll be near you. This is especially true if the Storm Prediction Center issues a PDS, a “Particularly Dangerous Situation” tornado watch. This means there is a higher than normal chance for tornadoes and any that do form will be very strong.

In either case, PLAN AHEAD. When the storms approach, you should already be someplace where you have easy access to shelter. You should not be holed up in a mobile home or weak structure. If you don’t have a basement, storm cellar or plenty of strong building around you, GO SOMEWHERE ELSE. Find a mall with designated tornado shelter areas, or to a restaurant with a walk-in refrigerator or freezer, or to a friend or neighbor who has a better shelter available. Stay away from windows and outside walls. Remember, it’s possible you may not have warning at all. The first sign of a tornado may be debris flying into the building you’re in! You need to be able to act quickly to protect yourself and your loved ones. Spending a couple of hours someplace safe as the storms pass is much better than being caught with nowhere to go. A little disruption in your life is better than serious injury or death because you were too stupid to act.

I’m also a big proponent of weather radios. Especially those with Specific Area Message Encoding (S.A.M.E.) which allows the user to set the area(s) they wish to receive warnings in. There are thousands of places to pick them up, but the best source I’ve found is your local city hall. Mine offers weather radios for $25. Mainly because where I live now, there are no sirens.

I personally have been awakened in the middle of the night with only seconds to get to shelter simply because I had turned my weather radio off before going to bed. Unbeknownst to me, a second line of storms formed behind the ones I’d been watching earlier in the evening. I woke up to thunder, went to the bathroom and came out just as the sirens began to sound. My YouTube Videos tell the tale of what happened next. My weather radio alarms have been set ever since and NEVER turned off. Especially since I have moved out to a rural area with no sirens. There won’t be warning next time without my weather radio.