A Nuclear Power Wake Up Call In California 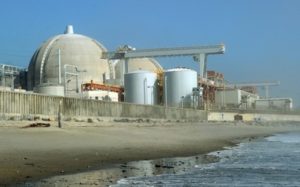 A recent post from The Breakthrough Institute, posted on Facebook by Energy From Thorium, has me so pissed I can’t help but laugh my ass off.

After shuttering the San Onofre Nuclear Generating Station this past June, the state of California delivered an extra 18 million tons of carbon dioxide to the atmosphere, in addition to the loss of 1,500 jobs and $50 million in revenue. A recent NPR report on California’s rising emissions mistakenly argued that the closure of the aging SONGS was still the right decision. The issue with the reactor’s steam generators was only present when they were run at a higher output – meaning that we could reduce the output to around 70% and still deliver over 13 billion kWhrs of low-carbon electricity each year. A very simple solution was cast aside; a resolution to restart SONGS at the correct power output would make for a happier New Year.

Are you freaking kidding me? In California, the “Greenie” capitol of the world, they shut down a clean source of energy and had to replace it with more polluting sources of energy?! Sounds to me like someone needs to pull their head out of their anti-nuclear ass. Perhaps this WAS the right decision. It seems like this is what it will take to make people see reason.

We NEED nuclear power. But as I’ve stated before, our current method of generating electricity from fission is the wrong way to go about it.

Light Water Reactors are the unsafe, inefficient reactors we use currently. They were built to produce weapons grade nuclear material for the Cold War, with electricity generation as a way to gain public acceptance. They use a fuel more precious and rare than gold (uranium), and vast majority of the fuel we put into these reactors comes right back out as unused waste we then have to store for thousands of years in some expensive manner. They operate at high pressure, requiring massive containment structures and constant cooling to prevent major accident, and as we’ve seen twice now, not always successfully. Chernobyl and Fukushima both breached their containment vessels explosively when the cooling systems failed, spewing radioactive materials all over the world.

Liquid Fluoride Thorium Reactors were invented about the same time by the same scientists. We decided not to build these reactors because they were no good at producing material for nuclear weapons. All they can do is produce energy for peaceful purposes. They use a fuel so abundant in nature enough of it can be found in your back yard to power your entire life from birth till death (thorium). Most of that fuel is used in the reaction, so very little waste is generated. The waste we’ve already created in LWRs can be run though the LFTR and used up. What’s left can either be recycled into useful products, or stored for a fraction of the time of LWR waste. They operate at normal atmospheric pressure, eliminating the need for massive containment structures. They can’t meltdown, since they operate in a molten state anyway. They don’t require complex cooling systems to prevent catastrophes and in fact can be shut down in a very short period of time. For example, the scientists studying this form of reactor would routinely shut down the reactor and go home for the weekend.

I don’t subscribe to climate change theories. I don’t believe in CO2 as some kind of greenhouse gas, or even as a form of pollution, and I have perfectly sound arguments in my favor. I do, however, know what smog is. I know what comes out of the tailpipe of my internal combustion propelled vehicle. I know the same noxious and poisonous gasses come out of coal and natural gas fired power plants. I don’t want to breathe this crap. I know the kinds of toxic materials that go into producing solar panels and I know what these substances are doing to the environment where these things are being made. I know wind and solar power, no matter how hard we try, will never meet our energy demands.

Nuclear power is the future, and thorium is the fuel. We need to get off our asses and get it done.