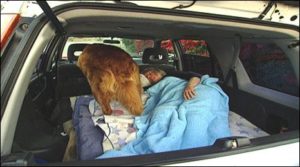 You’ve lost your job. Maybe you’re getting unemployment, but it’s not enough to pay the bills. Your rent is past due, you’re being evicted. You have to put your worldly possessions into storage. You’re now sleeping in the car while trying to find a job.

You try parking overnight in a parking lot, but are soon harassed by security or police for vagrancy. So you move from place to place, hoping you won’t be harassed that night.

Where do you bathe? It’s hard to find a job when you smell like a yak. The best you can hope for is a quick sponge bath in a public restroom. If you’re lucky, and have the money for it, you can use the showers at the local lake park if you can get a season pass. But what if it’s out of season?

This is a situation I personally have been in several times in my life. Fortunately I’m resourceful and have managed to make the best of things. I’ve managed to pull myself out of it as well.

But these are hard times. More and more people are faced with this scenario every day. Where do you go when you lose your home? Who can you turn to when you have no one to turn to?

Our society focuses a lot of attention on the homeless and destitute,  people who have absolutely nothing left of their lives. But little assistance is available for those who are living on that edge between making it and being destitute. Those whose homes were foreclosed on or couldn’t make the rent and now have nowhere to go.  Maybe they’re receiving unemployment, or have a job that doesn’t pay well enough. Maybe they just started working but don’t yet have the money to get another place to live.

These people usually have one thing in common… They’re sleeping in their cars. Which leads us back to where to park and how to take care of basic hygiene?

What I would like to see is one of these charities who has been so focused on rehabilitating people living on the street focusing their attention on those trying to avoid being there in the first place. My solution is instead of opening up a homeless shelter, which takes a large amount of resources and money, open up what I call a Car Park. Literally someplace where people who live in their cars can park overnight. This could consist of nothing more than a parking lot and bathroom and shower facilities just like any campground or state park. They would then have someplace to park, sleep and bathe.

Simple rules such as closing the park during the day (so everyone is required to leave) and prohibiting out-of-vehicle camping or cooking would prevent turning the place into a shanty town and allow for cleanup of the park and facilities. Electric, plumbing and a handful of people to administer the facilities would be the only overhead. Those who can afford it could pay a low admission fee, or food vendors could be available to help recoup some of the costs for running the park.

Something to think about.