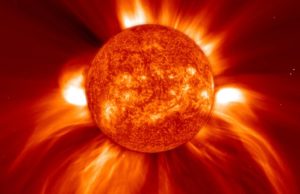 EMP or Electromagnetic Pulse seems to be a pretty hot topic among disaster preparedness enthusiasts these days. For those who don’t know, EMP happens when a powerful electrical disturbance in the upper atmosphere races towards ground (more precisely, THE ground), causing massive power surges in electrical lines and devices, effectively burning them all out.

The cause of this disturbance can be either natural or man-made.

A natural EMP would likely come from the sun in the form of a Coronal Mass Ejection (CME). The Earth’s magnetic field will block most of the event, but some energy does occasionally get through to cause a widespread Electromagnetic Pulse. The last major CME event was the Solar storm of 1859, which burned out many telegraph stations in North America and Europe. If the same solar storm were to hit the Earth today, the EMP effects would be catastrophic to our high-tech world.

However, there is another, more sinister, source of Electromagnetic Pulse which I would like to focus on. Man-made, or Military EMP.

The largest source of Military EMP is the detonation of a nuclear weapon in the upper atmosphere. This is called High-altitude EMP, or HEMP. High-altitude EMP is a deliberate attempt by a nuclear armed nation to disrupt the electrical systems of the target nation. The effects would be equally as catastrophic as natural EMP, only to a smaller area.

The one point many writers seem to miss when discussing High-altitude Electromagnetic Pulse is this is a nuclear attack against a nation. Because of this, if a nation were to launch such an attack against another nation, there’s a high probability this EMP is a prelude to an all-out nuclear strike. We’re talking World War III here. Chances are the attacked nation will retaliate in kind, or is under the protection of a nation that will.

Most of the articles I have read regarding EMP recently seem to leave this little detail out. Likewise, when discussing what to do should an EMP occur, they are missing the critical detail that in all likelihood air-burst or surface-burst nuclear warheads are inbound. In this case, the EMP you’ve just experienced means you have only minutes or even seconds to TAKE COVER!

Put another way, Electromagnetic Pulse should be treated as a warning of nuclear attack AT ALL TIMES, regardless of the actual source. When the power goes out, check your cell phone, check a battery powered radio and do so quickly! If these things don’t work, ASSUME THE WORST, DUCK AND COVER! You should stay protected from blast effects for at least 30 minutes after any EMP, longer if you can.

If nothing else has happened after an hour or so, then you can start thinking about what to do next. Try your car, your motorcycle, your lawnmower, etc. See what you have to work with. But stay alert! You may need to “Duck and Cover” again at any moment.

Your next warning could be the brilliant flash of a nuclear explosion. This means you need to protect yourself from blast effects and heat-flash IMMEDIATELY. Like a giant arc welder, any exposed skin may be burned by this flash of light. Don’t look at it, it will blind you. People laugh about “Duck and Cover” but it could save your life.

What should be obvious is that in the case of an all-out nuclear attack, your next move is to shield yourself from fallout. I’m not going to go into that here. If this is a one-off EMP attack or turns out to be natural EMP, it’s going to be a catastrophe on the same scale. Likewise I’m not going to discuss the same doomsday scenario so many others describe in their articles.

Where I break from the others who discuss EMP is I don’t believe this HAS to be a doomsday scenario if we get our shit together quickly enough. I’m not fatalistic enough to believe that in the US we are doomed to millions of deaths, food and water shortages, etc. I believe that we have enough people in this country to restore enough critical systems to avert such a disaster. As long as we prepare ourselves mentally to get off our asses and fix the situation, instead of panicking and rioting. We don’t need everyone, we don’t even need that many. We need just enough people with the balls to stand up, take charge and get this wealth of labor moving quickly.

YOU need to be one of those people. YOU need to grab your friends and neighbors and volunteer your services to help your local emergency managers. They will likely be the ones in charge. Impress upon everyone the need to restore power quickly before things get worse. You may not have the skills, but to misquote Toto, there’s nothing that a hundred men or more cannot do.