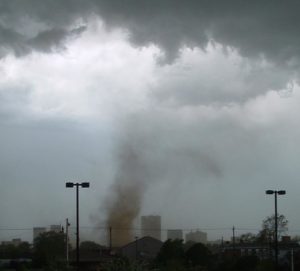 On April 26, 2016 the Storm Prediction Center issued a PDS Tornado Watch that included a large portion of the North Texas area. This is a special kind of watch issued only in a Particularly Dangerous Situation. That is to say when computer models are predicting the possibility of extraordinarily severe weather events, including strong, long-lived tornadoes, very large damaging hail and destructive winds.

The Storm Prediction Center and the National Weather Service do not use this phrase lightly. Although on this particular day things did not exactly line up as the computer models had predicted, if they had, it would have been disastrous for everyone affected.

There were indeed a few tornadoes that had hit in the area. And for anyone affected by these storms, the predictions were spot on as far as they’re concerned. But for most of us, all we saw was a good light show and some heavy rain.

This has lead some people to question the wisdom of issuing this PDS Tornado Watch, getting everyone riled up over what turned out to be just a normal spring squall line.

I for one, am not among them

Being the weather nut that I am, I too studied the computer models. I saw for myself the ingredients that were in place as these storms developed. My own sense of self-preservation caused me to park my vehicle in a parking garage and wait out the storm in a safe location. I warned my friends by phone and social media of the potential for disaster. And if I see the same set of data, I’ll do it all over again.

You see, there was another storm system that rocked the area on December 26, 2015 that caught many people completely by surprise. The day after Christmas a violent tornado ripped through Rowlett and Copeville and came within a couple of miles of my home. The SPC and NWS did not hype this system up before hand. I could quite literally SMELL this storm coming hours before the first supercell formed. Accordingly, I warned my friends by phone and social media. One friend bawked, saying nothing was going to happen. He ate those words. People died. Many said they had no idea it was coming. But I did, and so did my friends.

That’s why we do it

That’s why when conditions look especially bad, those of us who pay attention will jump up and down, screaming and foaming at the mouth to get you to pay attention. They call it Cognitive Dissonance, when you believe everything is fine because it has always been fine, when in fact things aren’t fine at all. But no one wants you to panic, we just want you to pay attention to what’s happening. When you’re told severe weather is coming, keep an eye on the weather.

And when it doesn’t happen… Even under a PDS Tornado Watch… Realize we got lucky. One small change in conditions and we could have been hosed!