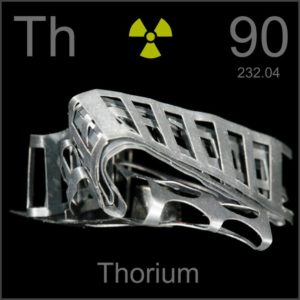 As I’ve written before, I believe Thorium (specifically the Liquid Fluoride Thorium Reactor) is the future of energy production. A cheap, clean, abundant and safe form of nuclear power discovered decades ago, but largely ignored for economic and military reasons. It’s a disruptive technology that would displace petroleum as energy king, and it’s impossible to make nuclear weapons from.

I just read a news article today that scares the ever-loving shit out of me.

Chinese going for broke on thorium nuclear power, and good luck to them

The nuclear race is on. China is upping the ante dramatically on thorium nuclear energy. Scientists in Shanghai have been told to accelerate plans (sorry for the pun) to build the first fully-functioning thorium reactor within ten years, instead of 25 years as originally planned.
“This is definitely a race. China faces fierce competition from overseas and to get there first will not be an easy task”,” says Professor Li Zhong, a leader of the programme. He said researchers are working under “warlike” pressure to deliver.
Good for them. They may do the world a big favour. They may even help to close the era of fossil fuel hegemony, and with it close the rentier petro-gas regimes that have such trouble adapting to rational modern behaviour. The West risks being left behind, still relying on the old uranium reactor technology that was originally designed for US submarines in the 1950s.

I can’t even begin to describe the catastrophe that will befall the U.S. economy if China succeeds in developing LFTR before we do. Whoever develops a Thorium Molten Salt Reactor first, wins. If it’s not us, we’re done. There will be no recovering from this. No chance to regain any footing in manufacturing industry. What we do have left will leave the country. Our status as an economic superpower will be destroyed forever.

Understand, China already has a huge advantage over the United States in production because of its inexpensive labor force. They’re a Communist country with billions of citizens, full control over resources and labor. If suddenly they have the cheapest source of energy too, before anyone else, there will be no one to compete with them.

This is our last chance to regain our status as kings of industry. If, on the other hand, we develop Thorium MSRs first, we can rebuild our manufacturing sector. Manufacturing jobs are the bread and butter of our economy. Without them, we have seen the erosion of our middle class and a dramatic increase in unemployment and underemployment as those jobs have moved overseas. We need to be the ones who develop LFTR first in order to create jobs and stabilize our economy. We can’t sit idly by and allow China to get there first. We have to lead the way.

Think of it like this: What if Germany or Russia had developed the atomic bomb before us? Run that scenario through your head a moment. How different would the world be? What would the world be like if the Nazis or Communists ruled the world? As an American Capitalist I find that thought rather disturbing.

LFTR is the atomic bomb of our time. This is nothing short of an arms race. It’s as much a national security issue as it is an economic and environmental one. Our entire way of life is being threatened. We need to act and fast! Write congress, tell your friends, tell everyone you meet, do whatever you can to get the word out. We need a Manhattan Project level development program for the Liquid Fluoride Thorium Reactor and we need it to start immediately!